In early 2017, the One Percent Fund started supporting the “Dairy cows for poor rural women” project in eastern Uganda. The aim of the project is to promote sustainable agricultural livelihoods through dairy farming.

The local NGO Pamo Volunteers has provided each of 27 women in Kumi District with a pregnant heifer. These particular mixed-breed cattle were recommended by the project’s veterinarian as suitable for the region. They can resist common cattle diseases, and they produce a large amount of milk.

While the 27 women will keep their cows, the resulting calves will be given gratis to other women. One cow has already delivered a calf. The cows produce enough milk for the families’ own needs while leaving enough for them to sell for income. The women received three days of training in how to keep cows. The cows live on their new owners’ existing property, which are being planted with fodder. 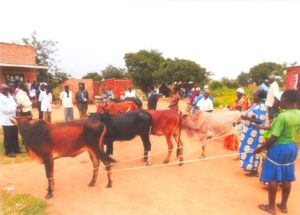 Benefits from the project will include sustainable incomes, improved childhood health, higher school enrolment, manure-enhanced soil, skills in how to train others, and spin-off projects in other communities. Government officials and local clergy participated in the project launch, indicating the strong level of community support that the project and the participating women are receiving.

“For a long time, women have not been taken seriously as valuable development partners,” said Martha Kulume, one of the project beneficiaries. “But thanks to the One Percent Fund and Pamo Volunteers, my cow will enable me get milk for the family and neighbours which will result into better nutrition and income generation. I will be able to send my children to school. My husband will begin to respect me as a family developer as he recognizes my input to the family welfare.”